Dan Melnick has been writing some great stuff over at Soundslope. If I ever get all the music writing done that I need to finish in the next few weeks, I will do some word writing on some of the subjects he has been hitting. In the mean time, I had to share this…

The Avant-garde and the Nature of Change | SOUNDSLOPE:

“If we accept as a basic premise that music is a communicative medium, then one way to view the renegotiation of boundaries is not as saying something new, but instead as saying the same thing in a new way. If we take this premise further and believe that music can communicate truth, and that there is a quintessence that is distilled throughout all music of all genres when played at a high level, then the the question of how that is communicated and whether this purported boundary is being pushed seems less important than if the communication occurs.”

“If most new commercially available jazz CDs sell between 600-1500 units, and the average break-even point is somewhere around 3000 units, how can independent jazz labels survive, let alone take chances on edgy or unknown artists?”

The trick is to make the CDs for less money. It’s all about figuring out your priorities. Does spending $1500 extra on super cool artwork make the music better? It just added 150 or more units to the break even point. To some people the visual art is a important as the aural art. That’s a valid point, so those folks might have to save some money someplace else.

I’ve been very lucky to have John Worthington, who produces my releases and does much of the technical audio work for the same money I get (which is the last money to come in). That method keeps up both interested in controlling the costs.

The future of recording good, boundary stretching music lies in a concept that I have subscribed to for some time, and that Jeff Gauthier states so well over at Downbeast:

“So, here’s a thought. What if the process of making CDs could be approached as a partnership? What if the artist and the label could agree to work together toward creative solutions where both sides are taking equal risks?”

That’s the only way it will work.

It’s time for another New Orleans New Music Ensemble (“No Enemy”)
concert! This time we have five new, hot-off-the-presses pieces for
chamber orchestra by New Orleans composers Jeff Albert, Leo DeJesus,
Ryan Olivier, Jimbo Walsh, and Rachel Woods, with Charles Taylor,
conductor. It’s classical, jazz, pop – grab a drink and view the art!
Meet the composers! You don’t get to hear a “band” this big playing
this kind of music in such a relaxed setting any old time!

I love this group. New Music in fun venues. One of the early discussions proposed a guideline that we should only play places that had a bar in the same room as the stage. I know my pieces sound better if the audience is loosened up a bit. This is not only music by composers that are still alive, but by composers that are in the room. Once we did a Bruce Bennett piece that was several years old, but most of the stuff isn’t even several weeks old. The first rehearsal is tonight, and I finished printing the parts for my piece for this concert on Tuesday, so I am WAY ahead of the game this time around.

If you are in New Orleans next Wednesday, please come to the concert. If you are not, say a prayer of thanks for the musicians (and composers) who are willing to do stuff like this for the love of creation more than the money (which there is more of this time, but still not too much).

If we get a good recording, I’ll post an mp3 of my piece here.

A lesson for all mastering engineers:

Last Wednesday I bought a used Toyota Prius. I filled it up right after I got it. On the way back from a gig in Lafayette last night, I stopped and got gas. It didn’t really need gas, but I needed to get out and stretch my legs. I had driven 350 miles on that tank, and it took 7 gallons. That’s 50 mpg. That can scratch your brain on a few levels. Last Thursday was the first in a two month long run of Thursdays at The Saturn Bar by Magnetic Ear. If the first gig was any indication, this will be a fun summer hang. Martin is making curry and serving it for free while it lasts. The food was slammin’ this week. He made a vegetable curry and a lentil curry along with rice and roti. The food is usually ready by 8 PM and the music starts around 9. We don’t play much past midnight, so come out early.

The band is excited about the chance to play regularly, and we had some great moments last week. I am looking forward to hearing the music grow through the summer. Photos courtesy of Ray Moore and his Blackjack.

I’ve always loved Stevie Wonder. There is something special to me about his genius.

Steven Bernstein‘s Millenial Territory Orchestra does “Signed, Sealed, Delivered.” The first time I heard it, I couldn’t get with it. I couldn’t get over my Stevie expectations. Today as I sat doing some computer drudgery that track came on. It was in the background. I wasn’t really paying attention. I didn’t even realize what tune it was until Doug Wamble’s vocal came in. It caught my attention, and somehow my expectations didn’t have time to hop on. That track is way bad…

I need to go back and listen to everything I’ve ever not dug with new ears.

Last weekend I had the pleasure of catching two nights of the Rob Wagner Trio with Hamid Drake and Nobu Ozaki. They played Sunday night at The Blue Nile, and Monday night at the Dragon’s Den. Monday also featured a guest appearance by Kidd Jordan.

It is always interesting and illuminating to get the chance to hear the same musicians multiple times in close temporal proximity. The similarities and differences can be quite enlightening. This is not a regularly working trio. They played a gig in New Orleans in December 2005, the night before the recorded their CD, and then did not play together again until June of 2007.

On Sunday, I only caught a few minutes of the first set, and most of the second set, because I was working down the street and could only get to the Blue Nile on our break, and then after my gig. Hamid had just flown in that day. The Blue Nile doesn’t have a very intimate vibe in its current layout, and the music seemed a touch tentative at times. I think some of it was the process of re-acquaintance, combined with the vibe of the room, and the day’s travel. Rob’s music can be pretty introspective, and tends to bob and weave more than all out burn, and it can take a while to get that vibe to settle in. As the gig progressed, I could hear the the trio finding each other.

Monday night at the Dragon’s Den was great. The night started with the trio plus Kidd Jordan. They did some improvised things, as well as one tune from the CD. Kidd sounded great, and his presence brought out some cool stuff in Rob. It pushed him to places he doesn’t usually go on his own. The second set consisted mostly of tunes from the CD, and the trio had found their good space. The Dragon’s den is a great sounding space, so I am sure that contributed to the night’s good feel as well. They graciously asked me to sit in towards the end of the night. It was a lot of fun. 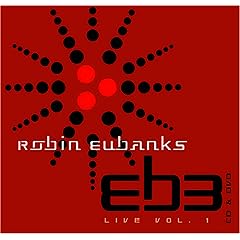 I keep hearing that the future of the music biz is video. Robin Eubanks is doing his part to prove that idea correct. His new release is a CD/DVD double disc by his band EB3, called Live, Vol. 1. The DVD is primarily performance footage of the live concert that produced the music on the CD. I love the fact that it is selling at Amazon for $16.98. That is both the CD and DVD in one package for $16.98. Right on Robin… or whoever made that decision. The DVD is provided to add to the music lover’s experience, not as an excuse to jack up the price. That’s good for one’s karma.

EB3 is an interesting band. It is a trio made up of Robin, Orrin Evans, and Kenwood Dennard. Each member of the group covers the bass role at some point. Watching Kenwood Dennard play keyboard bass and drums at the same time is a trip. That is part of the reason I think I prefer to listen to the CD, rather than watch the DVD. When I watch, I get too caught up in trying to figure out the magic trick, or who is doing what. I can deal with the music on a more pure level in audio only mode, but I must admit having the DVD there is a huge plus. I imagine that I will be in the minority in my preference for the CD over the DVD.

The music is electric. It is all electric keyboards, with lots of electric trombone and a good bit of live loop building. It is at times very funky, and pretty trippy in a few places too. Heavily electronic stuff can come off as gimmicky to me sometimes, but this disc avoids that trap. I get a vibe of very honest expression in this music. It seems to me that Robin has found a voice and setting in this band that are truly his and that he is comfortable with.

Full disclosure: This release was sent to me by a PR firm, but I was planning on buying it before the free one showed up in the mail.

The Stone is a NYC performance space that has the interesting practice of having one particular musician curate the programing for a period of time (usually a month). June is curated by Chris McIntyre and he is calling is trombone driven program Trombonophilia. It looks to be lots of fun. I’m sorry I won’t be there. Please drop a comment or email if you get to catch any of these shows.