I knew playing with George would be fun, it always is. What I didn’t know was that the Soul Rebels brass band would be playing before us. That was a suprise treat. These guys sounded great. Be sure to check them out if you get a chance.

Crazy by Gnarls Barkley has been tipped to make music history this week by becoming the UK’s first number one single based on download sales alone.

The future continues to arrive…

Forensic musicologist is now a job description. I am seeing a mashup of Quincy and my old music history professor…yikes.

Now lawyers hover over new records, listening for any legally actionable borrowing. Such cases are usually settled out of court — for undisclosed, but often enormous, sums. The most remarkable thing about the “Ready to Die” case is that it ever got to trial.

More interesting than the legal-sideshow aspect, I think, is the question of how artists deal with the situation. Imitation, allusion, parody, borrowing stray bits of melody or texture — all of this is fundamental to creativity. The line between mimicry and transformation is not absolute. And the range of electronic tools now available to musicians makes it blurrier all the time. 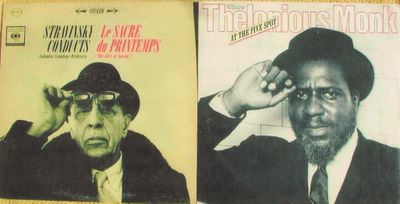 From Bill Reed via Rifftides.

Cory has posted a great rant on Apple’s reaction to the proposed French DRM law.

Through a happy accident tonight, I am sitting here listening to a great album that I haven’t heard in a few years.

Yockamo All-Stars – Dew Drop Out is an all star collection of New Orleans musicians. It was recorded in 1998, and is full of good old New Orleans groove and joy. Many of my favorite musicians, like Tim Green, Clarence Johnson III, and Herlin Riley are on it, and I’m especially digging Leroy Jones and Craig Klein.

The French parliament has backed plans to give consumers more choice over music downloads from the internet.

MPs backed a draft law to force Apple, Sony and Microsoft to share their proprietary copy-protection systems by 296 to 193 votes.

The aim is to ensure that digital music can be played on any player, regardless of its format or source.

I don’t know how this will affect the French market, but I know how it would affect me. It wouldn’t get me to use a player other than my iPod, but it would get me to look at other download services besides iTunes Music Store, especially for stuff that ITMS doesn’t have.

All About Jazz has posted a review of Chicago percussionist Mike Reed’s recent CD.

Mike Reed | In the Context of

I had the pleasure of improvising with Mike when I was in Chicago in late February. It’s a CD worth checking out.

Sell shares in your band or label to fund your next CD. Personalized artistic venture capital.

When Four Day Hombre were offered a string of record deals two-and-a-half years ago, the financial clout and creative control the band wanted were missing.

“We came close to a couple of (major) deals and then we were going to go through an independent label, but then it just fell through,” singer Simon Wainwright says.

“We decided that it was either carry on and get the money one way or another and set up a label and do it ourselves – or it was just throw the towel in and say enough’s enough.

“And none of us were really ready to do that.”

So the band sent an email to fans asking them to buy shares in their own label.

Alamo Music was born and the band promptly gave themselves a three-album deal.

Improvised music from Seeger, Petersen + Marsalis, and a live recording of an improvisation by Jeb Bishop, Jeff Albert, Jim Baker, and Mike Reed.